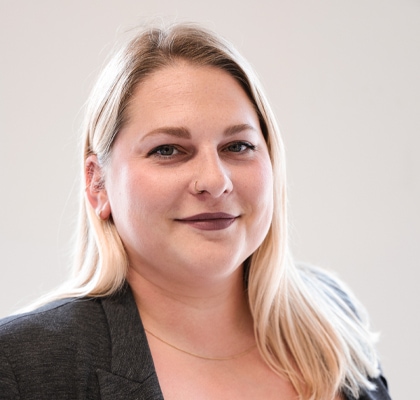 Kaitlynn received her law degree from University of Western Ontario and then returned to Winnipeg to build her practice here. She completed her articles with Phillips Aiello and received her call to the bar in June 2018. She then joined Phillips Aiello working as an Associate. Now with Wasyliw Wiebe, Kaitlynn practices primarily in the area of criminal defence.

Kaitlynn has built a reputation as a tenacious and effective advocate. She believes that each client, no matter the seriousness of the charge, deserves a fulsome and rigorous defense. She approaches each case with the same dedication.
Kaitlynn has represented clients across Manitoba on a wide variety of charges including: murder, robbery, firearm charges, and drug possession and trafficking charges. Though based out of Winnipeg, Kaitlynn also provides quality service for individuals in Northern Manitoba, traveling to Dauphin, Swan River, The Pas and Thompson for cases. She also attends to many remote court circuits in Northern Manitoba such as Moose Lake, Grand Rapids, Pukatawagan, and Norway House to name a few.
Kaitlynn has also represented parents on child protection matters.

Kaitlynn is passionate about access to justice and advocates for those facing the particular challenges that arise from living in remote communities.